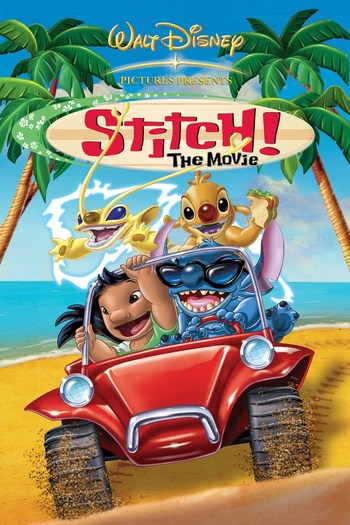 Stitch was Experiment 626...meet the other 625!
Advertisement:

Stitch! The Movie is a 2003 American Direct to Video animated science fiction comedy film that serves as the Pilot Movie for Lilo & Stitch: The Series. It is the second film in the Lilo & Stitch franchise to be released, but the third chronologically (2005's Lilo & Stitch 2: Stitch Has a Glitch comes before it). It was released on August 26, 2003.

The film starts off with the disgraced (and forcibly-retired) Gantu meeting with career criminal (and totally not a gerbil) Dr. Jacques von Hämsterviel. He knows about Gantu's previous experience and informs him that he isn't after Stitch; however, he does need his experience for something else. It is soon revealed that that "something else" was Jumba's six hundred and twenty-five other experiments, which are all conveniently dehydrated in pod form. However, Jumba has hidden the pods, and when he won't reveal where they went, Gantu captures him and a pod that was knocked askew.

Meanwhile, Stitch struggles to fit in with the local populace on Hawaii. He desires to have "cousins" after Lilo tells him about how people on Hawaii call each other "cousins", but he's too freaky for the humans outside of his ʻohana, and doesn't seem to have anyone else like him there. After Jumba's kidnapping, however, Lilo and Stitch find the experiment pods and accidentally-on-purpose lets Experiment 221 loose (on purpose because she wanted to activate it, accidentally because it wasn't meant to escape). Once the human-alien duo chase down 221 and capture it, Stitch quickly bonds with the yellow experiment, deeming 221 (which Lilo later names "Sparky") his "cousin". But soon after, Hämsterviel contacts the ʻohana and demands the other experiments in exchange for Jumba, so in response, Lilo and Stitch go out to save both Jumba and Stitch's "cousins".

Not directly related to the anime Stitch! beyond being part of the same franchise with the same characters.

The experiments who appear in this film (besides Stitch) include:

Since this movie is the pilot to Lilo & Stitch: The Series, it gets an experiment appearances list just like in the recap pages for all the other episodes of the show. This list will not be counting those who are merely mentioned or have only been seen in pod form, since that would make for a pretty long list.

Stitch! The Movie provides examples of: