Series / The League of Gentlemen 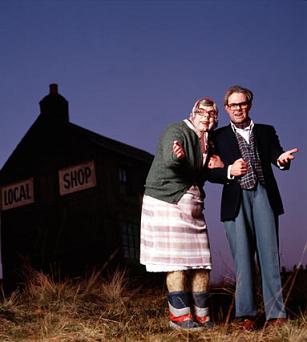 A Local Show for local people. There's nothing for you here.
Welcome to Royston Vasey. You'll never leave.
Advertisement:

British Sketch Comedy/Sitcom, with a very dark tone of humour, and plenty of horror trappings.

Set in the town of Royston Vasey (or Spent, in the original radio version), the show focuses on the very strange lives of the inhabitants: their warped obsessions, quirks and relationships. Also notable in that almost all characters are played by one of only three actors: Steve Pemberton, Reece Shearsmith, and Mark Gatiss. (Fourth musketeer Jeremy Dyson is part of the writing team, and is occasionally seen in cameos.)

The show ran from 1999 to 2002, which included three series and a Christmas Special. It also had two live shows in 2001 and 2006 respectively, as well as a feature length movie in 2005. A fourth series consisting of three episodes aired in December 2017, in order to celebrate the 20th anniversary of when the show originally debuted on BBC Radio in 1997.

Not to be confused with;

Also see the 2005 film, The League of Gentlemen's Apocalypse, which contains examples of:

“This is a local page for local people! There’s nothing for you here!”