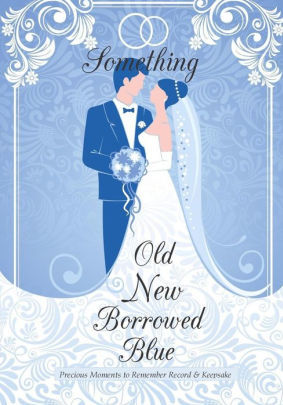 An old English tradition describing the four things a bride must carry at her wedding:

The final line "...And a silver sixpence in her shoe" is all but forgotten nowadays, at least in part because sixpence pieces aren't used anymore in Britain and never were in the USA. Some people buy antique coins especially for the purpose (and for considerably more than 6p); whether that also counts towards their Something Old is up for debate.

For Shotgun Weddings, the Something New is the baby (often directly invoked as such).

The Something Blue is usually a ribbon or brooch, or some other minor accessory. Before 1840, blue was the choice colour for wedding dresses as it was the colour for purity (being associated with the Virgin Mary; see True Blue Femininity). The white gown only became popular that year, when Queen Victoria wore a white lace gown for her wedding to Prince Albert and has remained a traditional western wedding costume ever since.

Wedding episodes are frequently named after this, occasionally split into Cross-Referenced Titles for a multi-parter.