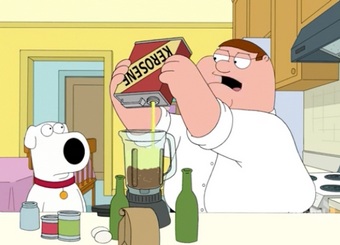 "Kerosene is fuel, Brian. Red Bull is fuel. Kerosene is Red Bull!"
"Do you know what hell it is to be fat and stupid at the same time?"
— William M. Gaines, MAD parody of Up the Academy
Advertisement:

In fiction, being big doesn't necessarily mean you're probably a bad person...

Maybe you're just stupid. In any group of characters the fattest one will probably be the dimmest.

Granted poor diet and a sedentary lifestyle is not necessarily a clever lifestyle choice (leaving aside more complicated real life reasons for weight gain or even being naturally fat that are unlikely to be portrayed in fiction), but many tubby characters seem to think of literally nothing else other than eating. Even if they are good, the fat character is generally a comic ditz.

This trope is particularly popular in animation.

May overlap with Dumb Muscle if the character is an example of Stout Strength. See also Fat Bastard, Fat Slob, Fat Comic Relief, Shorter Means Smarter. Often an element of a Straw Loser. Contrast Lean and Mean, as well as Geek Physiques (fat).