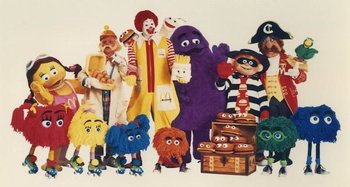 "McDonaldland" was a universe used in McDonald's advertising from 1971 until 2003. It was created by Needham, Harper & Steers.

McDonaldland is a brightly colored, idealistic fantasy world inhabited by various mascot characters, representing items on the McDonalds menu. There's the main mascot, a clown named Ronald McDonald; Grimace; Hamburglar; and the French Fry Kids. Birdie the Early Bird was introduced in the early 1980s to advertise the breakfast menu, the Happy Meal Gang were introduced in 1979, and 1984 introduced the McNugget Buddies, while 1998 introduced a dog named Sundae. There were also various minor characters like Uncle O'Grimacey, CosMc, and Iam Hungry. In 1971, McDonald's got into a lawsuit over Mayor McCheese. As a result of the lawsuit, the character and several others were later retired. Mayor McCheese, Officer Big Mac, Captain Crook (later changed to just "the Captain"), and the Professor were used until 1985.

In the early 2000s, McDonaldland was finally phased away. McDonald's switched to the "I'm Lovin' It" campaign and did away with its cartoony characters. The sole exception was Ronald McDonald, who continued to be their iconic mascot until he was replaced with a Minion-esque anthropomorphic Happy Meal box named "Happy" in 2014 (and even then, Ronald hasn't been completely phased out). In 2015, the Hamburglar was temporarily brought back to advertise a new menu item.

For years the franchise existed as more than just simple advertisements. Throughout its lifespan, there was a lot of McDonaldland merchandise. This included the "McDonaldland Fun Times" magazine, The Wacky Adventures of Ronald McDonald direct-to-VHS cartoon series, a line of action figures, and the video games McKids and McDonald's Treasure Land Adventure.