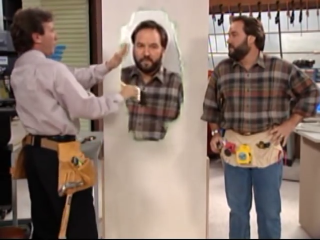 Buy your fresh coat of "Al", straight from Binford!
Advertisement:

Sometimes, cartoon characters will paint with one or two strokes in color combinations that simply cannot be done that way in the real world, such as stripes, checks, polka dots, or even more elaborate patterns.

Finding one of these might be assigned to a naive person as a Snipe Hunt.