The Face of the Sun 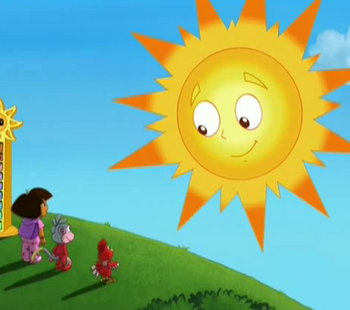 "A partial solar eclipse is when the Earth moves across the part of the sun blocked by its sunglasses."
— Randall Munroe, What If? #115: Into the Sun

A common depiction of the sun in more lighthearted fare, such as children's and animated media, is that of a large yellow disc with rays perpetually coming out and a human face, often wearing sunglasses, which leads to the question of why the sun would need protection from its own rays. (Well, what other glasses would the sun wear than SUNglasses?) Plus, if your head emitted as much light as the sun does, you would probably need something to protect yourself from the harmful rays of... yourself.

The sun is typically depicted as having a smiling face, but if the sun in question is a Sinister Sentient Sun, potentially creating a Heat Wave, it will look mean. In all scenarios, the sun provides viewers with potential Nightmare Fuel.

This is Older Than They Think: Many classical and medieval works of art depict the sun, "Sol", in this manner, though obviously not in a cartoony fashion. This was codified in medieval heraldry, where the sun was a "sun radiant" if it had rays but no face. A sun with both rays and a face was "the sun in his splendor" (the modern flags of Argentina and Uruguay present a distinctive South American form of this, the Sun of May, which takes some influence from depictions of the Incan sun god Inti; a similar sun appears in some Peruvian and Bolivian symbols). This is common illustration in folklore

Compare The Man in the Moon. See also Light Is Not Good because, as said before, some of these examples are either evil or creepy. Also see Weird Sun.

The Smith family goes to a planet where a sun screams every day for 42 hours.

The Smith family goes to a planet where a sun screams every day for 42 hours.