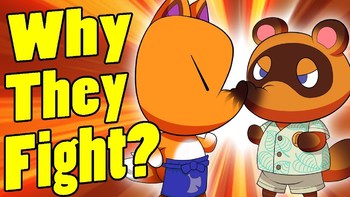 In Japanese folklore, the Tanuki (or raccoon dog) and kitsune are perhaps the two most recognizable members of the henge, a subset of Youkai consisting of supernatural, Shapeshifting Trickster animals with human intelligence.

On one side, you have strange, stout creatures resembling fat raccoons who go about with their gigantic nads on full display, known as pranksters who like to trick humans in ways such as paying them with leaves disguised as money, or transforming themselves into wine bottles that roll away from people whenever they try to grab it. On the other, you have mystical, elegant, squinty-eyed foxes who infiltrate human society, bewitch humans, and even bring down entire kingdoms with illusions and deceit, often with a penchant for transforming into gorgeous women to seduce men and young boys.

These two critters are often portrayed in Japanese culture as rivals and foils to each other in various ways, sharing much in common yet being different from each other at the same time. In many cases, they will have a Slobs vs. Snobs relationship where the Tanuki serves as the "Slob" of the dynamic, generally being the simpler, humbler, jollier, and good-hearted one who plays petty pranks just because it's funny; the Kitsune in turn tends to be play the role of the "Snob", being much more graceful, prideful, and dignified, but also more cunning and ambitious if not outright malevolent, meddling with humans in ways that can change the course of their lives. If either one is portrayed as evil, the Tanuki usually gets the sympathetic end of the stick (e.g. being a Guile Hero and a Lovable Rogue compared to the Kitsune being a Magnificent Bastard), but the opposite is not unknown (e.g. a Tanuki pulling cruel pranks For the Evulz vs. a Kitsune with Undying Loyalty).

Tales where the two creatures come into conflict are known as Kori no Tatakai (roughly "Tanuki/Kitsune Battle", with kori referring to both youkai), in which the Tanuki and Kitsune pit their abilities against each other in supernatural showdowns. Ability-wise, the Kitsune will easily beat the Tanuki in terms of raw power, but the Tanuki will be far more capable and creative when it comes to trickery and disguises, summarized by the famous expression "the fox has seven disguises, but the tanuki has eight". In most of these stories, the Tanuki's knack for mischief enables it to outwit the Kitsune and emerge victorious.

The duo are also employed as an Animal Motif through the use of certain facial features (or a more general Fat and Skinny dynamic), with people being either "tanuki-faced" (square/round) or "kitsune-faced" (inverted triangle/heart-shaped). Naturally, "foxy" features tend to be more popular, and you can expect the fox to be the Veronica whenever the two appear as a Betty and Veronica pair.

Whether or not the work pits both henge against each other or showcase their contrasting traits, you can still expect them to be paired with each other; even if one of them shows up by themselves, the other likely won't be too far behind.

Dogs can also be added to upgrade the duo to a trio, with both henge fearing man's best friend for their ability to see through disguises. The ouija-like game kokkuri is written with the characters fox-dog-tanuki, though in this case the "dog" may be a reference to Tengu.