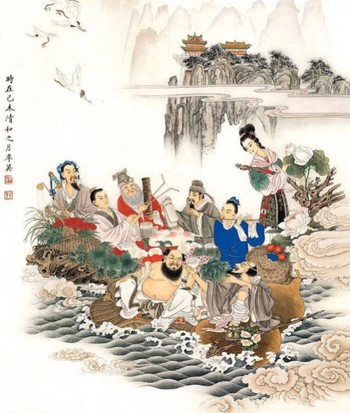 China being one of the oldest civillizations in the world, has also produced a huge mythology that has changed over thousands of years and is home to just as many characters.

While obviously we can't list every single legend and person to have ever existed, here you can read about the most important deities and other beings of Chinese mythology.

Worth knowing is that the original religion before the introduction of Buddhism was Taoism, which itself emerged from shamanism, divination, and the worship of many local and regional gods. Please make sure to also read about Journey to the West, which is considered one of the four great classical novels of Chinese literature.

Chinese history and culture as a whole should be placed under the main China page. This page deals with the myths and legends.

What is interesting about Chinese mythology is that it does not have one creation myth, rather the Chinese classics record numerous and contradictory origin myths. The reason why the Chinese did not have a specific creation myth unlike other ancient civilizations is hotly debated as to what it means in terms of Chinese culture, philosophy, and history. Some scholars go as far to argue that China has no creation myth whatsoever with all myths being either imports or a simple Hand Wave while others will retort that it indeed does but are too hard to understand.

Chinese mythology is influenced by three sources: Buddhism, Taoism, and various popular deities and spirits (commonly known as "Chinese folk religion" or "Shendao" which is actually where Japan's "Shinto" gets its name), all mixed in together. Buddhist gods are Chinese versions of various figures associated with Buddhism, such as Buddha, Avalokiteśvara, or The Four Vajras. Taoist gods are the immortals and holy men of the Taoist religion, such as Laozi or the Jade Emperor. Traditional gods are the Chinese gods that have been around since before Buddhism or Taoism got a foothold or deities absorbed from foreign sources, as well as legendary figures hailed as gods.

All three systems are intertwined in a complex Celestial Bureaucracy reflecting the ancient Chinese government. Worship of the gods and ancestors is heavily influenced by the philosophy of Confucianism...which also has religious elements to it. This is because the line between philosophy and religion in Chinese culture is extremely blurry. Many Chinese people who claim to not adhere to any religion are still very superstitious. The pre-historic Chinese were also a shamanistic culture which was common across Northeast Asian peoples and some shamanistic practises known as Wuism have been adopted by ethnic minorities living in China or have found their way into Chinese folk religion which in turn influenced Taoism and Confucianism, particularly ancestor veneration which is believed to have first developed within Chinese shamanism.

Naturally, this results in loads and loads of gods and an extremely complicated religious culture that requires years of study. These systems are not seen as practically incompatible (even if theologically they may be), so there is little point splitting them up here.

Modern-day Chinese rural and festival mythology is mostly based on the Jade Emperor system, with added Buddhism figures. Officially, they would be classified either as Buddhists or Taoists, but in practice they are mostly secular.