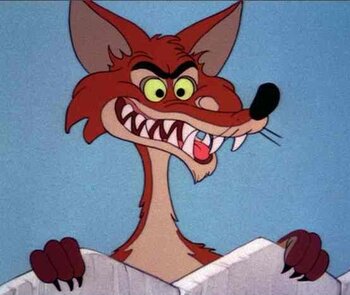 Stu Hopps: You know what? Pretty much all predators, and Zootopia's full of 'em.
Bonnie Hopps: Oh, Stu.
Stu Hopps: And foxes are the worst!
Bonnie Hopps: Actually, your father does have a point there. It's in their biology.
— Zootopia
Advertisement:

Foxes are clever, and humanity generally respects cleverness. But they also have qualities that earn the ire of many people. They're natural predators to animals like rabbits and mice, which are often associated with innocence and sweetness. They're a menace to poultry farmers, often killing chickens, turkeys and waterfowl. They're an invasive species in certain places that are devastating to wildlife. They're notoriously associated with rabies note which makes them highly aggressive, completely unlike their normal skittish behavior around humans. Any human who is attacked by a rabid fox, or has any contact with a rabid fox's saliva or other body fluids, can be infected. They won't know until the symptoms start to show - and once the symptoms start to show, rabies is virtually 100% fatal. And the un-dog-like sounds many species make are the stuff of nightmares.

So it's perhaps unsurprising that foxes are often depicted in a negative light, especially in children's media.

In fiction, it's not uncommon for foxes to be portrayed as sneaky, conniving, and unsavory. Antagonistic foxes will generally be evil geniuses or manipulative bastards. Even foxes who aren't predators get hit with this trope, especially if they are dangerous scavengers. Sometimes, they're mean-spirited tricksters who feign being good-natured. Sometimes, they're treacherous backstabbers who would sell virtually anyone up the river for a chance to get ahead, and other times they're just plain vicious bullies. Occasionally, they'll get portrayed as evilly seductive, sometimes complete with "foxy" wordplay.

Sub-Trope of Predators Are Mean. May overlap with Fantastic Foxes, Asian Fox Spirit, and/or Fox Folk. For other fox stereotypes, see Foxy Vixen and Cunning Like a Fox.

Slagar, a fox, is a merciless slaver and kidnapper who is plotting against Matthias and his family.

Slagar, a fox, is a merciless slaver and kidnapper who is plotting against Matthias and his family.