For the David Bowie song, go here. For the television series, go here. 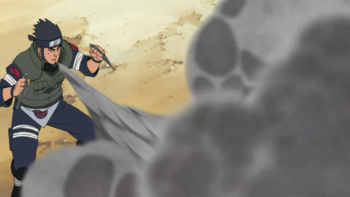 And dust to dust.

This is the power dealing with ash, the matter left after being burnt. Ash can be in solid, liquid, or gaseous form, with most users in fiction using the solid or gas variants.

Often overlaps with fire powers due to being formed by burning, resurrection or instantaneous death due to its association with death, and Flashy Teleportation due to the visual effect of dissolving into ashes when doing so.

Sub-Trope of Single Substance Manipulation. Compare Deadly Gas, Dishing Out Dirt, and Super Smoke. Not to be confused with Ashes to Crashes, when the ashes fall out of the overturned container.

Having copied Hank's smoke power, Delsin can turn into smoke, ash and fire.

Having copied Hank's smoke power, Delsin can turn into smoke, ash and fire.