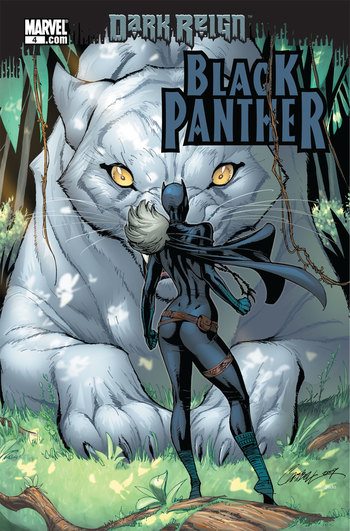 There's something visually incredible about a large member of the cat family with white fur. Given white often represents purity and innocence, a feline creature with fur can be seen as majestic and divine. Often, these cats have a mystical origin.

White tigers and lions are the most recurring example of this trope in fiction. White lions and tigers also exist in real life as do snow leopards who have white-gray fur. Big white cats are also pretty rare in real life, especially those that are mutations as with the aforementioned white lions and tigers. Lionesses prefer males with darker mane, and white tigers cannot camouflage themselves effectively, leading to them not even existing in the wild and only in domesticity.

This trope can also apply to characters who use a white panther Animal Motif.

The Great White Feline can be seen as a symbol of power, uniqueness, mysticism, magic, authority etc.

Given the frequency to associate such creatures in media with the supernatural, this trope could be seen as the big cat equivalent of Mystical White Hair.

Expect this trope to come up in the form of the White Tiger of the West when the Four Gods of Chinese Mythology are featured in a work.

Generally this trope applies to heroic characters, but rare villainous examples do exist, perhaps overlapping with Albinos Are Freaks.

Sister Trope to White Wolves Are Special and White Stallion. White Bunny also involves a white animal, but has innocent connotations instead.

Note: Mega Neko with white fur do not qualify as this. This trope applies to large sized (not domestic) cats with white fur. A Mega Neko is a giant domestic cat (or other cat species that is normally small in size).