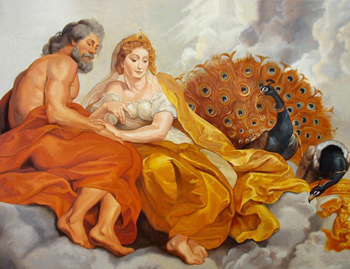 A rare shot of Zeus and Hera not at each other's throats.
"I sing of golden-throned Hera whom Rhea bare. Queen of the Immortals is she, surpassing all in beauty: she is the sister and wife of loud-thundering Zeus,—the glorious one whom all the blessed throughout high Olympos reverence and honour even as Zeus who delights in thunder."
— Homeric Hymn 12 to Hera (translation: Evelyn-White)
Advertisement:

This is when two god-like characters (be they actual gods or merely extremely powerful) become a couple.

Might be a Battle Couple. Very likely experiences Eternal Love. For the other type of "couple," see Super Couple. A subtrope of Divine Date, which may only involve one actual god.