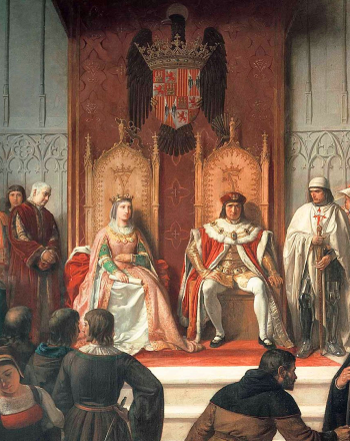 Catholic Monarchs Administering Justice (detail), Victor Manzano y Mejorada
Bob Dole: Bill, I thought perhaps it would be best if we could talk in private. It would be appreciated.
Hillary Rodham Clinton: This is private.
Dole: Now, I would hope that the leader of the opposition and the President could—
Clinton: I happen to be the Co-President of the United States.
— Saturday Night Live
Advertisement:

Most rulers have spouses and many have mistresses (or "misters", historically cicisbeos) as well. However, often only one of the couple exercises rule and the other is merely to decorate the palace, provide heirs, seal alliances and entertain the king/queen.

A ruling couple, on the other hand, are equal or near equal partners, and may even be Happily Married. Rather than one ruling and one staying in the palace they jointly rule. The rulers will rely on each other as trusted counselors and they will be The Good King and The High Queen in one. Perhaps they will show this by receiving audiences on two thrones. Perhaps the consort will have a regular seat in the royal council and a vote. Perhaps even the two of them will discuss deep and labyrinthine affairs of state during matrimonial activities. And likely they will be addressed as partners and written down as such in the chronicles. If historians refer only to the reign of Alice or the reign of Bob then this trope might be averted. If however historians regularly refer to the reign of "Alice and Bob" then it is a ruling couple.

This usually refers to a monarchial government, as monarchy is intentionally a Family Business. This tends to happen on a somewhat rarer basis in The Republic, although the couple can still very much get away with this if they both are socially and politically strong and savvy and able to complement each other as individuals.

On many occasions, they will also be a Battle Couple.