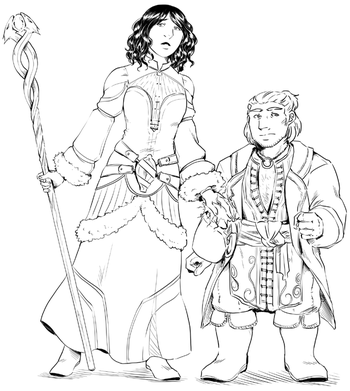 , used with permission
Beyond Heroes: Of Sunshine and Red Lyrium

is an Alternate Universe retelling of Dragon Age: Inquisition by Lady Norbert.
Advertisement:

When Varric Tethras - rogue, storyteller, and occasionally unwelcome tagalong - is finally introduced to the only survivor of the explosion at the Temple of Sacred Ashes, he's horrified to discover that it's none other than Bethany Hawke. Confronted with the knowledge that his precious “Sunshine" is the Herald of Andraste, he resolves that he's not budging from the newly reborn Inquisition until she's released from her own obligations.

With her older brother Garrett in hiding as a member of Isabela's pirate crew, and her twin brother Carver serving with the Grey Wardens, Varric reasons that it's his responsibility to protect Bethany as much as possible. Together, they have to survive everything the Crapsack World of Thedas keeps throwing at them.

Being an AU rehash of Inquisition, there are spoilers here for material from throughout the Dragon Age franchise.