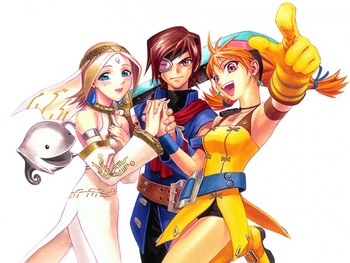 In left to right order; Fina, Vyse and Aika, who figured themselves out
There were Valuans, there were Black Pirates, and there were Blue Rogues, and that was enough for Vyse and Aika to wrap their heads around. Then a girl crashed into their lives, and the world became a whole lot bigger. And somewhere during a globe-spanning epic adventure that changed everything, a man, his best friend, and the girl that went sailing off the map with them figured themselves out. Because Blue Rogues always played by their own rules.
Advertisement:

is a Skies of Arcadia fanfiction. Like the video game it’s based on, it follows the saga of the air pirate Vyse, son of Dyne, and his childhood friend Aika as they find a girl wearing strange clothing named Fina, take on the world-spanning Valuan empire, unlock ancient secrets, challenge world-destroying threats, and grow into air pirates in their own right - and maybe discover a more unusual and vibrant love between them all.

This story is a pseudo-novelization, and rather than reconstruct the game's events line-by-line, it focuses on filling in gaps in the original story with extra world-building and character development, most notably fleshing out the development of the game's lead trio into an eventual OT3.

Also can be found on Archive Of Our Own here

Between Three Rogues contains examples of: