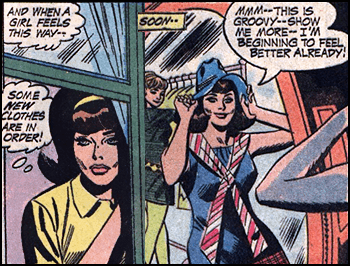 A character, who is almost Always Female, is depressed or unhappy and goes shopping to make herself feel better. A variation involves the character getting a makeover for the same reason. Shopping may even be a part of said makeover.

Retail Therapy often accompanies a Shopping Montage, although to demonstrate that a character is truly depressed and in a really bad spot, she may be grimly and desperately shopping alone. Alternatively, a group of friends may decide that a particular friend is being too mopey and take her shopping in an attempt to cheer her up. Depending on the character, this can be met with mixed success.

Usually this occurs after experiencing rejection or turbulence in a romantic relationship, but Retail Therapy can be a response to all sorts of trauma, ranging from things like having a bad day to losing a job. A sympathetic character generally won't use Retail Therapy to cope with the death of pets and/or other characters, as this implies the character attaches a monetary value to lives. Male characters who use exhibit this trope often carry connotations of being effeminate or extremely materialistic.

Compare Distracted by the Luxury and Mid Life Crisis Car (its rough Spear Counterpart). Can overlap with Credit Card Plot if the character in question incurs massive credit card debts because of the excessive purchases made during Retail Therapy. The character is often (but not always) Ms. Red Ink.

This is Truth in Television for a very large number of people. Even men (as much as they deny it).