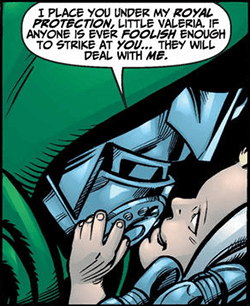 "Even if you become the world's enemy, I'll... I'll be your Knight!"
— Squall Leonhart, Final Fantasy VIII
Advertisement:

A person (usually The Hero) has her or his motivation built around protecting another person. Most of the time, it's his or her Love Interest, but it could also be her or his sibling/s, or friends, or child(ren), or parents/parental figure.

In Anime, the sentence "Zettai ni mamoru!" is likely to be used — if not spoken aloud, then thought. Depending on context, this can mean anything from a literal "I'll protect you from danger" to a more comradely "I'll watch your back" to akin to a Love Confession, i.e. "I'll always be there for you." Because of this, expect the recipient to respond with a Luminescent Blush regardless of what she says.

Almost every time, some sort of complication or detail will be brought up in this situation.

Naturally, not all cases will fit neatly into one of these categories, and of course, there are cases where there isn't really any major complications just someone protecting another person from the Monster of the Week, for as long as it takes. Sometimes the declaration is mutual, and you get a Battle Couple.

A Sub-Trope of Protectorate and The Champion. Bodyguard Crush is when the protection comes before the emotions. The Dulcinea Effect is when this absolute dedication pops up all of 10 seconds after he first sees her. Mama Bear and Papa Wolf are when it's a parent protecting their child. This trope is part of the job description for Lady and Knight. In ancient times, becoming someone's guest automatically put you under their protection, leading to a lot of this. If the protector is smarter, more grounded in reality, or more competent than the protectee, or perceived to be, they're a Cloudcuckoolander's Minder. Compare If You Ever Do Anything to Hurt Her....

"Stay away from my Luz!"

As Luz is about to be killed by the Abomi-ton 2.0, Amity steps in to protect her by overwhelming the Abomi-ton with her own Abomination magic.

Alternative Title(s): I Will Protect Her, I Will Definitely Protect You

"Stay away from my Luz!"

As Luz is about to be killed by the Abomi-ton 2.0, Amity steps in to protect her by overwhelming the Abomi-ton with her own Abomination magic.