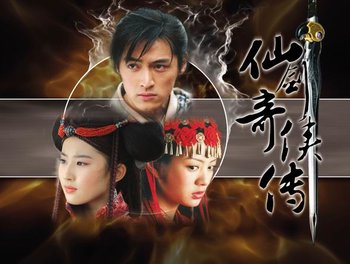 Also known as Legend of Swordsman and Fairy. Based on the first installment of Sword and Fairy RPG series, starring Hu Ge, Crystal Liu, and Ady An.

Li Xiao Yao, a "Stinky Punk", journeys to Dream Island to find a cure for his sick aunt. There he meets and marries the love of his life, Ling'er. On his way back home with the cure, he discovers that he's been tricked by the Lunar Sect Cult so that they can kidnap Ling'er.

He awakens in his bed, having forgotten his entire trip to Dream Island, but having saved his aunt. He rescues Ling'er from the Lunar Sect Cult and is in turn rescued by a mysterious stranger who teaches him kung fu. Xiao Yao and Ling'er travel to the capital to meet her father.

Along the way, they meet various people, get harassed by the Lunar Sect Cult, discover both of their histories, save the world and fall in love with each other all over again.