Series / Children of the Stones 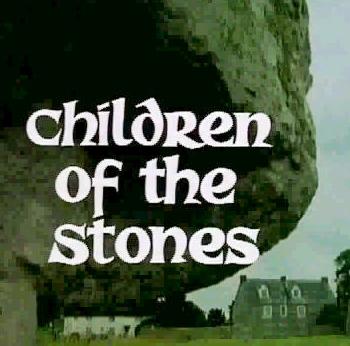 Children of the Stones was a British children's drama series filmed in 1976 by HTV. It was set in the village of Milbury (filmed at Avebury

), which is surrounded by a Stone Circle. It was very dark and sinister for a children's programme, particularly by today's standards. The tone of the series was set by the choral singing used for the opening music

The story centres on Professor Blake... sorry, Brake and his son, Matthew Brake. They arrive in Milbury, where most of the villagers seem to be acting strangely. They call themselves the Happy Ones, greet each other with the phrase "Happy Day!", have an inordinate love of Morris Dancing and in school the children all solve incredibly complex mathematical problems. Apart from the Brakes, only three other families seem to be unaffected. Then, one by one, they also join the ranks of the Happy Ones.

The only other people who are unaffected are Dai, a half-crazed poacher, and Rafael Hendrick, the local squire. Towards the end of the series, Dai is killed and his body mysteriously disappears. All that remains are a few fragments of an amulet that match up with some pieces that had been found on that that spot years before under a fallen stone along with the bones of an inhabitant of the village known as the Barber-Surgeon.

Eventually it becomes obvious that Hendrick has been using the power of the stone circle to brainwash the villagers. Matthew and his father trick Hendrick into using the power of the circle on himself. They manage to escape, but the force of the circle turns the rest of the villagers to stone. When they wake up the next day, they find that the villagers are back, but are subtly altered. Dai is now a tinker instead of a poacher and Margaret Smythe, the curator of the village museum, and her daughter Sandra are now American instead of British.

It is implied that the events in the village repeat in a time loop with similar characters performing the same actions over and over. The link between Dai and the Barber-Surgeon is described above. Also, Matthew has a picture which depicts the end of the sequence (a man and boy escaping the circle while others are turned to stone). The final scene in the drama is the arrival of Joshua Litton at the manor house. He bears a remarkable resemblance to the missing Hendrick...

In 2014, Jeremy Burnham wrote Return To The Stones, a sequel novel set in the present day. Matthew takes his son Tom back to visit Milbury. These days, his father Adam is living in the manor house...