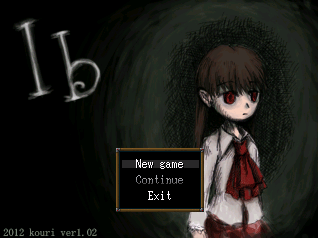 "come down below ib
ill show you someplace secret"
—The text below the Fabricated World painting
Advertisement:

Ib is a horror adventure game released by Kouri in February 2012, using RPG Maker 2000. It follows the experiences of a nine-year-old girl named Ib who visits an art gallery with her parents. While looking around, she finds herself stuck in a strange, surreal world where the art has come to life. What's worse, Ib's life is now linked to that of a red rose she picks up, and if all the petals fall she will die.

Luckily, Ib finds friends along her journey. They are a man named Garry whom she saves, and a girl about her own age named Mary whom they bump into later, both of whom have roses of their own. Together, the three of them solve puzzles and try to find a way to get back to the real world.

that they are working on a remake of the game to be released in 2022 for the game's tenth anniversary, featuring redrawn graphics and new music. The remake is officially released in Steam on April 11 2022.