Literature / In Desert And Wilderness 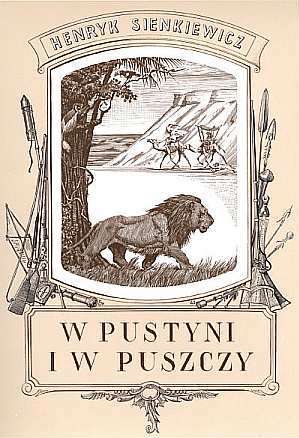 1884, The River War rages in Sudan. Meanwhile, in Port Said, two engineers, a Pole Mr. Tarkowski and an Englishman Mr. Rawlinson, supervise the maintenance of the Suez Canal. Both widowers, they became fast friends soon after they met, and so have their children - fourteen years old Staś Tarkowski and eight years old Nel Rawlinson. This idyllic life is interrupted when Fatma, the wife of one of Mahdi's generals, in an attempt to join her husband, has Staś and Nel kidnapped, counting on their influential fathers arranging an exchange.
Advertisement:

But the children escape - right into the wildest Africa - together with a pair of runaway slaves they trek deserts and jungles, hoping to reach the ocean.

Serialized in 1910-11 in "Kurier Warszawski", W pustyni i w puszczy is one of the most popular novels by Henryk Sienkiewicz. Adapted to movie (and a TV series) twice: first in 1973 by Władysław Ślesicki (starring Tomasz Mędrzak and Monika Rosca), then in 2001 by Gavin Hood (Adam Fidusiewicz and Karolina Sawka).

), sadly not updated for ages.

Read it in Polish here

Tropes found in desert and in wilderness: