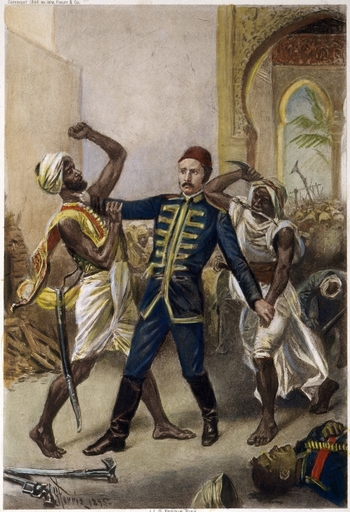 "Too late! Too late to save him,
In vain, in vain they tried.
His life was England's glory,
His death was England's pride."
— Music hall song memorializing Charles Gordon
Advertisement:

In 1881, a religious leader in Sudan named Muhammad Ahmad declared himself the Mahdi, the expected redeemer and purifier of the Islamic faith before The End of the World as We Know It. He led a successful rebellion against the Egyptian government, astounding the world by defeating technologically superior forces with just spears and lances. In 1884 the British government (which had established an informal protectorate over Egypt two years earlier) sent the renowned soldier and explorer Charles George Gordon to oversee the evacuation of Anglo-Egyptian troops from Sudan, but the Mahdists holed him up in Khartoum for ten months. The world eagerly awaited news from the besieged Gordon, but expeditions sent to relieve him were held up on the Nile and by the time they reached Khartoum, it had fallen and Gordon was killed by the Mahdi.

This disaster sent shockwaves through the British government, causing Queen Victoria to send a Strongly Worded Letter to Prime Minister William Gladstone chastising him for failing to act in time. However, a crisis in India caused Britain to withdraw its troops from the Sudan before they could recapture Khartoum. The Mahdi died several months later, but his successor the Khalifa remained in power, engaging Anglo-Egyptian forces in a low-level conflict for the next decade. The fighting also spread to Sudan's neighbors, including Abyssinia (Ethiopia), Italian Eritrea and the Belgian Congo.

In 1896, the British sent a force under Horatio Kitchener to reclaim Sudan. This force was victorious at Omdurman in 1898, claiming revenge for Gordon's death 13 years earlier. This expedition included a relatively unknown soldier with some political ambitions named Winston Churchill, who published the first exhaustive history of the war. The Sudan afterwards became an Anglo-Egyptian condominium, jointly ruled by those countries until achieving independence in 1956.