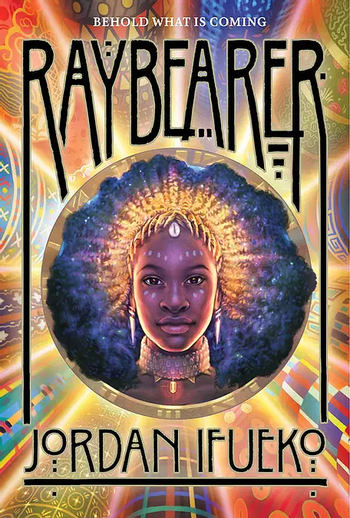 Raybearer is a 2020 young adult fantasy novel by Jordan Ifueko.

Since her birth, Tarisai has only known Bhekina House, a small dwelling unseen to those but her tutors and her mother. While she knows her tutors well, she knows very little about her mother, known only as The Lady. She rarely sees her mother and even more rarely gets to be held by her. This lack of connection makes Tarisai yearn for a family, for people who aren't afraid of her and love her freely.

Luckily for her, she may just have a chance to get exactly that when she's ferreted off to the capital. There, she joins other children around her age in a test to eventually become apart of Prince Enkudayo's Council of Eleven. Only those who love the Prince and are able to connect to his Ray can be accepted into his Council. Unluckily, The Lady has ordered her to kill the Prince as soon as she's accepted into the council. Will she be able to get the family she's longed for or will she end up destroying it?

A sequel named Redemptor was released in August 2021.