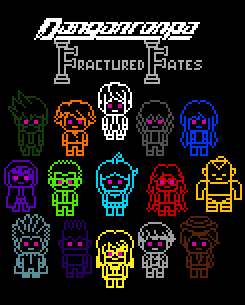 Hana Amari is a girl who is average in appearance, but in reality holds exceptional talent; specifically, she has recently been scouted by the famed Hope's Peak Academy to attend as the Ultimate Surfer. Unfortunately, whatever excitement or fear she may have felt is all throw out the window when her first day at the academy takes a turn for the strange. Suddenly, Hana and her fourteen other classmates find themselves in a mysterious castle, with a certain monochrome bear appearing and forcing them into a game of kill or be killed. Now, Hana and her friends must uncover the mysteries lurking in the halls of their prison in order to learn the truth behind this killing game...or face the dread of despair. But the truth...may be even darker than Hana could have ever imagined.

. The main story is completed, with a prologue, six chapters, three intermission chapters, and an epilogue. Be warned: all spoilers below are unmarked, because like its canon counterpart it would be difficult to list tropes for this fic without spoiling everything.

Rumi: If not now, when!? We all know how easy it is to lose your life around here- that's why you need to grab hold of the present as tight as you can!
Hana: The only thing I'm 'grabbing hold of' is time to search around this wing!
Hinata: Y'know, as much as I love hearing you girls talk about grabbing hold of things-
Hana: Don't make this worse, Hinata!