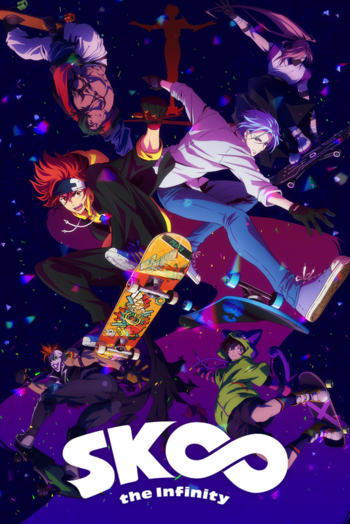 SK8 The Infinity (known in Japan as SK∞) is an original Sports Anime animated by Studio BONES and directed by Hiroko Utsumi, who previously directed Free! and the anime adaptation of Banana Fish. It originally aired as part of the Winter 2021 anime season.

The story revolves around "S", a secret downhill skateboarding race held in an abandoned mine in Okinawa where pretty much anything goes as long as someone reaches the finish line. Reki Kyan is obsessed with "S", and when New Transfer Student Langa Hasegawa moves to Okinawa from Canada, the two form a bond as Reki teaches Langa to skate.

However, Langa may be better at skating than he initially seems...