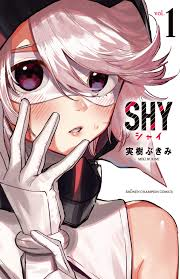 In the middle of the 21st century, the world was on the brink of World War III. But suddenly, superheroes appeared all over the world and with their efforts, they saved it from certain destruction. Nowadays, heroes are world-acclaimed celebrities and a role model to many. One of these heroes is Momijiyama Teru alias Shy, a 14-year-old and extremely shy middle school student from Japan. While making a public appearence at an amusement park, a roller-coaster accident happens and despite her best efforts, Shy is unable to save one passenger who is put in a coma.

With both public opinion and herself blaming her for the failure, Shy loses her powers and becomes a shut-in. But after getting a pep talk from fellow heroine Spirits and seeing a young boy's determination to save some people from a burning skyscraper, she regains her determination and becomes Shy once more.

Trying to become a better hero, Shy soon learns about a mysterious young boy named Stigma who threatens the world's peace and is drawn into the conflict between earth's superheroes and Stigma.

Shy is a superhero manga by Bukimi Miki, which began serialization in Weekly Shonen Champion in 2019.