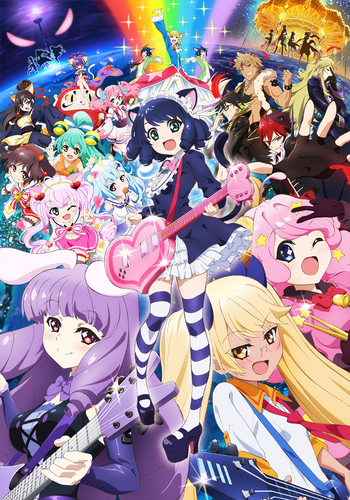 "Gonna be a music millionaire!"
Advertisement:

Show By Rock!! is a 2015 anime based on the Sanrio iOS and Android game of the same name. It follows Cyan Hijirikawa, a first-year high school student with a passion for music. Cyan wishes to join the music club at her school, but is too shy to do so. One night, after receiving a special guitar called "Strawberry Heart" in a rhythm game, Cyan is sucked into the game world and turned into a Cat Girl with the ability to harness the the power of Strawberry Heart to defeat monsters. Stuck in Midi City, Cyan soon meets the band Plasmagica, and, presented with the opportunity to fulfill her dream, signs onto their label.

Show By Rock!! is notable for being Sanrio's attempt at appealing to a wider demographic, being aimed at older audiences than their traditional fare. Animated by Studio Bones with Studio GOONEYS on CGI, it premiered on April 5, 2015, and can be watched with a subscription on Funimation's website here

In late 2015, the anime was picked up for a second season, which finally premiered during the Summer 2016 Anime season. Titled Show by Rock!!#note pronounced Show by Rock Sharp, the band faces off against the Queen of Darkness and the Victorians, who destroy the world during the Puroland Festival. Ninjin Riot sends one of their members back in time to before the incident, and retrieves Cyan from the human world in order to help them combat her. It also introduces Arcareafact, a Boy Band made up of rich snobs, and Bud Virgin Logic, a metal band working under Dagger Morse.

In 2019, a third and fourth season were announced to premiere in 2020. The new season, Show by Rock!! Mashumairesh!!, Now animated by Kinema Citrus and Polygon Pictures, with ENGI for Stars' CGI, takes the focus away from our original cast of bands and instead introduces three new bands as protagonists: Mashumairesh!!, the eponymous all-girl group, Dokonjofinger, an all-boy group, and Reijingsignal, an all-girl rival trio. Taking some cues from the Fes A Live game, the center of this adaptation turns to Howan, a native Myumon who travels to Midi City in order to make her big break as an artist.

All of this culminates in the fourth season, Show by Rock!! Stars!!, where the main bands from previous seasons get to interact more intimately with each other and have the older bands mentor the younger ones. This series started airing in the Winter 2021 season.

Tropes relating to the original seasons are:

Tropes relating to Fes A Live seasons (Mashumairesh!! and Stars!!) are:

Example of:
Best Known for the Fanservice