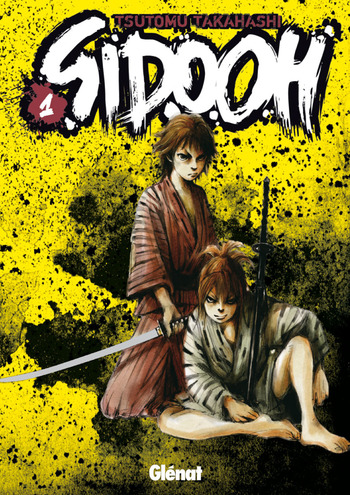 Sidooh is a historical fiction seinen manga written by Tsutomu Takahashi from 2005 to 2010, consisting of 25 volumes.

In 1858, during the chaos of the Bakumatsu Era of Japan, young brothers Shotaro Yukimura and Gentaru Yukimura are orphaned when their mother succumbs to cholera. In her last moments, she urges them to take up their samurai father's sword and become strong enough to survive in the harsh and cruel world. Coming across a ronin named Kiyozo Asakura, they are tricked and sold to the Byakushinsō, a secluded village led by the enigmatic Rugi. Intended to be sacrificed, Shotaro instead defeats Rugi's chosen warrior and takes his place as the Byakushinsō's champion, and he and Gen are adopted as Rugi's sons.

Two years later, the Byakushinsō allies itself with the anti-Shogunate, anti-foreigner shishi and Shotaro and Gentaru are assigned to the White Lotus squad alongside the young samurai Inō Kennosuke and kunoichi Mozu. They are sent on a mission to destroy the Black Ships and overthrow the Shogunate, but Rugi betrays the Byakushinsō to the Shogunate's forces and Sho, Gen, Inō, and Mozu are the sole survivors. Spending a year in hiding, the surviving members of the White Lotus ally themselves with the shishi of Aizu to seek revenge for their fallen comrades and bring stability to Japan by purging it of the American foreigners.