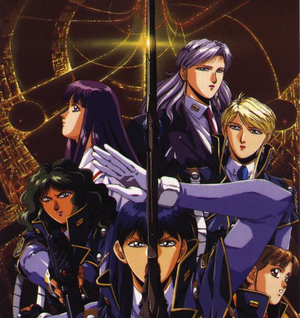 The year is 2026. Tokyo is under attack from the Lucifer Hawks, alien life-forms that feed on human flesh. The Attacked Mystification Police (Abnormal Mystery Police in one volume of the manga), or AMP, an all-female squad of police officers is tasked with hunting and destroying the Lucifer Hawks, led by the mysterious man Ganossa Maximillian.

The AMP uses a mix of magic and high-tech gadgets to fight these monsters and their human allies. Along the way, some of them find love. And they find out most of the truth behind the Project Gaia disaster in 1999 that first opened the gate to the world of Nemesis and unleashed the Lucifer Hawks on Earth. Just about all of them had parents, grandparents, or other close people involved in the screwup.

Silent Mobius began as a manga by Kia Asamiya which ran in Comic Dragon from 1989 to 1999. It was later adapted into two movies (by AIC) in 1991 and 1992, and a 26-episode TV series (by Radix) in 1998. The setting is heavily influenced by Blade Runner and many exterior shots have an uncanny resemblance to shots from Bubblegum Crisis.

A sequel subtitled QD Paranormal Police has been launched in 2013, taking place 17 years after the events of the original.

A stage-play adaptation has been announced for Spring 2017.