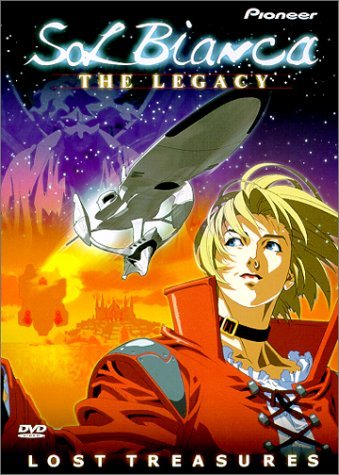 Sol Bianca is an OVA series by AIC, about the adventures of an Amazon Brigade of Space Pirates and their Cool Starship the "Sol Bianca", in a universe where the Earth is a distant memory. It consists of two episodes released in 1990 and 1992 (respectively), but the series was canceled despite a blatant Sequel Hook for a third episode. The series was one of the first releases by the fledgling ADV Films (still "A.D. Vision" then), and did well enough to inspire a short-lived comic adaptation.

In the first movie, the crew of the Sol Bianca come across Rim Delapaz, a young stowaway boy who wants to see his parents in the planet Trez. He convinces them to take him there by telling him of a treasure known as the Gnosis, which is said to contain great power. However, it is currently in the hands of Emperor Batros, who took control of Trez through a brutal military coup and has placed the neighboring planet Uno under military occupation. The pirates must fight against his regime to claim their prize.

In Sol Bianca 2, the crew returns to steal a valuable substance known as Pasha, and wind up getting into conflict with fellow space pirate captain Gomez, who wants the Pasha for himself. When they proceed to beat him to the punch, he vows vengeance and infects the Sol Bianca with machine-eating worms, getting them all stuck in jumpspace and making one of them fall ill. While the police and Gomez are on their trail, a mysterious individual calling himself Yuri Shuraba shows up and demands they come into his custody...

Years later, the series was rebooted in 1999 with the six-episode OVA series titled Taiyō no Fune Sol Bianca (Ship of the Sun Sol Bianca). Pioneer LDC also produced the new series, and released it in Western markets starting in 2000, as Sol Bianca: The Legacy. In this series, the initial team of four pirates gains a new member in Mayo Jessica, a stowaway who wants to see her parents back on Earth. The planet is said to be humanity's birthplace and is a beautiful world of lush greens and paradise. The crew decide to travel to Earth, snatching up artifacts along the way. But the Admiral of the Terran Federation wants to claim their ship in the name of Earth, and so sends the cold, calculating Captain Giunter to retrieve it and apprehend them. Thus begins a race through space to find the truth of Earth and Mayo's parents.