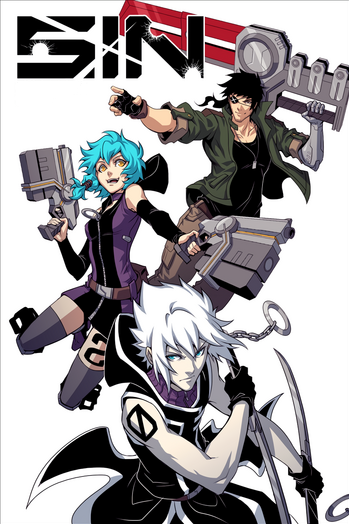 SIN is set in a post apocalyptic world, devastated from the war between the United Nations (U.N.) and the New Earth Alliance (N.E.A.) over the last resources of the planet. After years of battling and technical advance in the weaponry sector, both sides made peace to avoid the complete extinction of humanity. Now the United Earth's Federation (U.E.F.) is ruling over the planet, but resources are even more rare now and space might be humanity's last hope.Everyday life on Earth is now mostly run by gangs, terrorism and a strict class system.

The manga follows the plot lines of the "Skull" gang, a group of teenagers, trying to sustain their small renegade village and a group of assassins.

. Not related to SiN the video game.