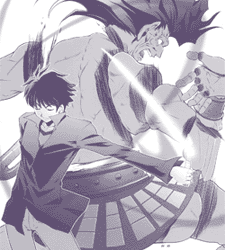 Yes, he CAN kill servants. note  Only under very specific circumstances. Also, this image came from a doujinshi.
Prisoner: Oh, my Lord Headsman! Thou hast swung thy sword too low! Hast thou heard my pleas? Hast thou chosen to spare this wretched life of mine? Oh, whatever can I do to repay thy kindness to me?
Executioner: Nod.
— A Classic piece of Gallows Humour... or should that be Block Humour?
Advertisement:

Animating and detailing realistic battles with edged weapons is remarkably difficult. Real-life edged weapons usually leave rough, horrible wounds, and severing arms, legs, or the neck of an individual is a very difficult task requiring either brute strength or significant time to saw at the wound, and that's assuming you manage to line the cut up with a joint, because you are not going to cut through solid bone. Buy a ham from the grocery store and try it yourself. But quite aside from the simulation issues, if realistic blade wounds were done, then a Single-Stroke Battle would be far more difficult to conceive of as trying to go all the way through your victim would be nearly impossible. Nearly.

As a result, most bladed weapons in fiction are impossibly finely-edged things, capable of slicing straight through a victim and leaving such a thin cut as to be almost unnoticeable. Passing straight through a spine or rib cage? No problem! Decapitating an individual with a single blow, or even cutting them apart in multiple angles? Can do!

Bonus points if it doesn't manifest until the attacker has sheathed their sword, and extra bonus points if the wound does not manifest until the victim (for example) reaches up to feel his neck, at which point his head falls off, or the victim assumes the attacker missed. Even more bonus points if the sword is thick enough (i.e. the sword blade is visible) that no matter what the edge is like, the width of the blade should shove out the pieces of the object as it passes through them, but it somehow doesn't.

May be justified (read: Hand Waved) if the swords are explicitly magical, really high-tech, unnaturally large, or absurdly sharp. If weapon is Razor Floss, almost every hit is Clean Cut.

See also the delayed version, the Diagonal Cut, and cousin trope Half the Man He Used to Be. See also Paper Cutting. Contrast Like Cannot Cut Like and Blade Spam.