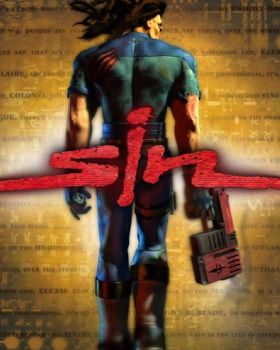 SiN is a First-Person Shooter action game for the PC developed by Ritual Entertainment and published by Activision in 1998.

Set in 2037, the games follow Colonel John Blade, the commander of an elite private security force, HardCorps, in the fictional Freeport City. A number of private security forces have taken the place of traditional police - one of these being SinTEK, a biotechnology firm owned by Elexis Sinclaire, a charismatic and dangerous leader who plans to reinvent mankind in her own image using mutated humans. The original game begins with Blade investigating reports of a robbery at the Freeport City Bank. As he digs deeper into the case, he soon discovers that Sinclaire will stop at nothing to carry out her plan, and that he is the only person standing between her and global domination...

Throughout the game, Blade is aided via radio link by a computer hacker at HardCorps named JC, who assists him with hacking networks and discovering more information. To survive in his quest, Blade must travel through a wide variety of levels, battling SinTEK forces and scavenging health packs and armor off their bodies as he progresses, along with collecting a variety of weapons.

The original game (which was caught up in the wake of Half-Life despite releasing almost a month before it) was criticized for being buggy and somewhat generic gameplay, but praised for the strong level design and excellent music. It sold well enough to receive several follow-ups, including the aforementioned SiN Episodes.

An anime film titled SiN: The Movie was also released in 2000, and contained several changes from the original game. It was intended to be a sequel, until Emergence was released, shunting the film out of continuity.

The original SiN and its expansion pack, bundled as SiN Gold, can be purchased

GOG.com. The Steam version in particular used to contain only the base game, and was exclusive to purchases of Emergence as a free bonus, but after Nightdive Studios acquired the SiN IP in 2020, they separated it from Emergence, updated it to the Gold edition of the game, and made several enhancements that previous owners received free of charge on March 18th of that year; the enhancements were also added to the GOG version. Nightdive is also currently remastering Gold in its Kex Engine under the name of SiN Reloaded. The remaster is being made in collaboration with 3D Realms, whose own previously shelved attempt at a SiN remaster is given new life as a result of the IP's rights changing hands.

The game has a character sheet, where character-specific tropes can be found for the main and secondary characters as well as for the mook classes.

open/close all folders
The series in general
SiN/Wages of SiN
SiN Episodes: Emergence
SiN: The Movie