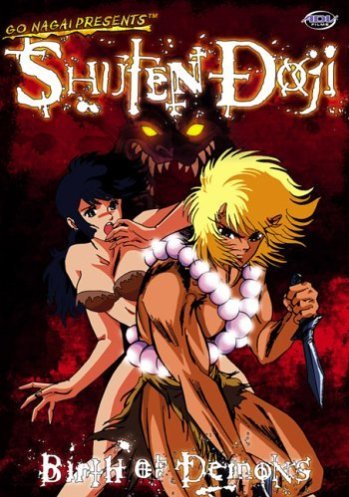 Shutendoji is a manga series from the mind of Go Nagai. Published from 1976 to 1978, it received a four episode OVA adaptation in 1989.
Advertisement:

Artist couple Ryuichiro and Kyoko Shiba have longed for a child, and one is presented to them from the mouth of a monstrous Oni, who tells them he will return for the boy 15 years later. Past this time, the boy is now known as Jiro Shutendo, an aloof teenager with no friends beyond his smitten schoolmate Miyuki. As promised, strange events start happening around him, most importantly the exploits of a Religion of Evil trying to kill him in order to prevent an ancient prophecy.

Although it was expected to be Nagai's next great success in the Dark Fantasy genre after Devilman, the manga and its adaptation remain one of his most obscure works.