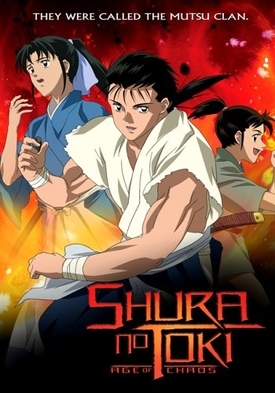 Even since the Heian era, the members of the Mutsu family have practiced an unarmed martial art, the Mutsu Enmei Ryū. They walked the path of the undefeated and were called the Shura no Mon (Men of Carnage). This is their story.

Mutsu Enmei Ryū Gaiden: Shura no Toki is a Japanese historical manga published by Kodansha since 1989 and collected in 15 tankoubon volumes, in eight story arcs. A prequel series to Shura no Mon, it began serialization in the same magazine in July 1989 and ran until November 2005. Each arc is loosely based on Japanese history, focusing on a member of the fictional Mutsu clan and their influence on the life of historical Japanese figures.

The work contains examples of these tropes: