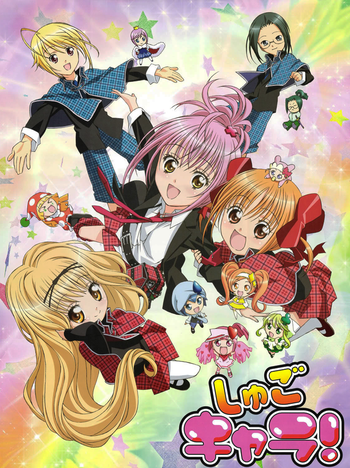 My own heart, unlock!
Advertisement:

Shugo Chara! is a shoujo manga by PEACH-PIT, serialized in Nakayoshi from 2006 to 2010. Compiled in 12 volumes, it won the 2008 Kodansha Manga Award during its run. Shugo Chara! received its own anime adaptation that began in fall of 2007, and is available on Crunchyroll

. In addition to its success, it was also adapted into a musical in 2009.

Amu Hinamori is a middle-school kid whose cool and cynical exterior has made her one of the most popular (and unapproachable) girls in school. Yet beneath this "Cool and Spicy" image lies a shy, clumsy and lovestruck girl who wishes that she had the confidence to express her true character.

One night she prays to her "Guardian Spirits" for the strength to be more honest to herself, and is shocked when her prayers are answered by three magical eggs. These hatch into her three Shugo Chara, or Guardian Characters, each one representing a different facet of her hidden personality: her sporty and energetic side, her artistic side, and her domestic side. With the aid of her Guardian Characters, which can bring her buried personality traits to the surface (sometimes against her will), Amu slowly learns to embrace and accept her Hidden Depths.

But Wait, There's More! Amu soon falls in with her school's "Guardians", an Absurdly Powerful Student Council whose four members each have their own Guardian Character. She discovers that her multiple Guardian Characters make her The Chosen One, able to transform into a Magical Girl with three different forms, one for each Guardian Character she has. With her new powers, she must hunt down the mysterious "Embryo" and battle against the agents of the Easter Company, who are creating Monsters Of The Week from her classmates' deepest insecurities.note Which has less of a focus in the manga than it does in the anime.

Has nothing to do with that Chara.