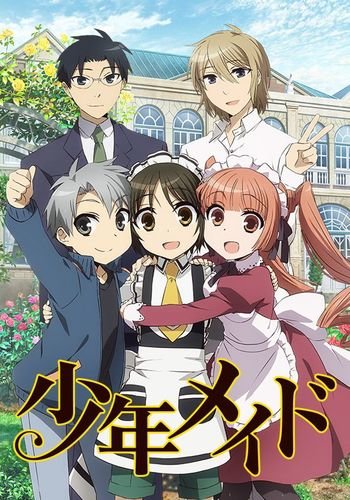 Shōnen Maid (少年メイド, Shōnen Meido, lit. "Boy Maid") is a Japanese manga series written and illustrated by Ototachibana, which ran in the shoujo magazine B's-Log Comic from 2008 to 2017. A 12-episode anime television series adaptation aired between April and July 2016.

After the tragic death of his mother, Chihiro Komiya, an orphaned fourth grader in elementary school, is left with no close relatives or even a place to live. This all changes when he meets Madoka Takatori, a wealthy but eccentric young man who is revealed to be his long lost uncle from his mother's side of the family; when Madoka noticed that Chihiro has nowhere else to go, he decides to take in the young boy to live with him. However, when Chihiro first sees his uncle's large mansion all messed up and filled with nothing but garbage-(since it's always like that) he decides to employ himself as Madoka's official housekeeper while wearing a frilly maid uniform and getting paid with allowance every month.