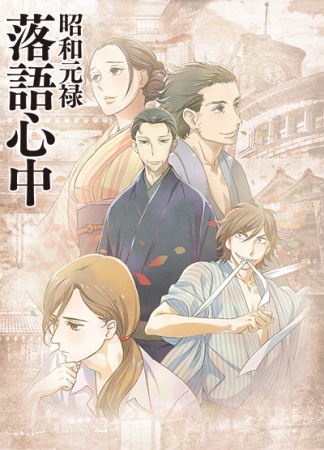 Shouwa Genroku Rakugo Shinjuu (Showa and Genroku Era Lovers' Suicide Through Rakugo) is a Josei manga by Haruko Kumota, which was serialized in ITAN from 2010 to 2016. It was adapted into two OVAs (known as Yotaro Hourou-hen, or the Yotaro Wandering Part) and a Winter 2016 Anime adaption. The anime started airing on January 8th 2016, and Studio DEEN did the animation. The anime's official website is here

It's The '70s, and an ex-con, whose name we later learn is Kyoji, wants to learn the art of rakugo

from Yurakutei Yakumo, a master that did a special performance of a rakugo story called "Shinigami" in prison one day. While Yakumo is more than willing to keep Kyoji in his house alongside the rebellious Konatsu, it turns out Kyoji (or Yotaro - rakugo slang for "fool") sucks at rakugo. Luckily for him, Konatsu is the daughter of dead rakugoka Sukeroku and willing to tutor him, but unluckily for her, she cannot pursue the path of rakugo herself because she is a woman.

for the curious note in the United States, Canada, Central and South America (including the Caribbean), United Kingdom, Ireland, South Africa, Australia, New Zealand, the Netherlands, and Scandinavia. The manga has a few accolades

and was nominated for more. The OVAs are in No Export for You status for most places of the world (although episode 1 of the broadcast anime tells the same story as the OVAs, only abridged). The manga was previously unavailable in English until Kodansha USA licensed it

under the name Descending Stories: Showa Genroku Rakugo Shinjuu, releasing it fromin May 2017 to December 2018.

Shortly after the first season finale, a second season was announced to air in January 2017.

See also Joshiraku, another, more modern series centered around the art of Rakugo.