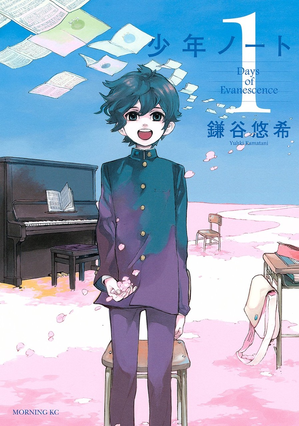 Spring is here. A gentle breeze is in the air. The cherry blossoms bloom bright pink against the blue sky. It's the first day of school for a new class. Yutaka can't help but cry on a day like this.

Yutaka Aoi is a young boy who is unusually sensitive to the sounds around him— in particular, the sound of beautiful music is enough to bring him to tears. The choir club at his new middle school has seen better days, so they're surprised when Yutaka asks to join, and eagerly accept him once he reveals he's a rare boy soprano. Yutaka's talent and passion for music get him noticed and begin to affect those around him... but the transient nature of his gift looms overhead all the while.

Shonen Note: Boy Soprano is a Seinen manga by Yuhki Kamatani that ran in Kodansha's seinen manga magazine Monthly Morning Two from 2010 to 2014, spanning eight volumes. The series would not be translated into English until Kodansha USA announced they had acquired the license in 2021, beginning to publish the volumes in 2022.