Note: Please be careful of tense when editing. A lot of the plot is in the past.

An ex-con who is inspired by seeing Yakumo the 8th perform at his prison, and becomes his apprentice as soon as he leaves jail. He has a similar rakugo style to Sukeroku. 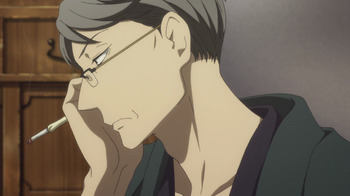 Click here to see him as a young man.

A rakugo master who was originally a dancer, but ruined his leg in an accident so he has to use a cane. This damaged leg also made his mother give him to Yakumo the 7th, but did not stop him from anything else.

His rakugo style was flawless in execution but had no feeling...at least initially. 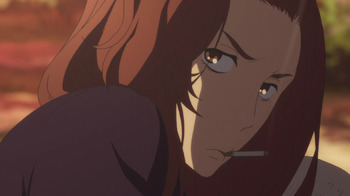 Sukeroku's tomboyish daughter. She does not have the smoothest relationship with Yakumo and idolises her father's rakugo, but cannot pursue it due to her gender.

A poor boy/man who was almost always in Japanese-style clothes. Died in an accident, which causes Konatsu and Yakumo the 8th to be on bad terms.

He was committed to things if they interested him and it could easily be felt in the way he told his rakugo, as he was animated and never hesitant.

A former Geisha who Yakumo the 7th and Hatsutaro met in Manchuria during the war. She came to Japan to see the opening of a new theatre, and tried to charm Kikuhiko but to no avail.

A man with a bowl cut who was the master to Kikuhiko and Hatsutaro.

A man who lived nearby to Yakumo the 7th as well as being that Yakumo's retainer, eventually carrying over to Yakumo the 8th. He seems to be close to the Yakumos in a butler-like way.

Eisuke Higuchi
Voiced by: Toshihiko Seki
A journalist introduced in the anime's second season who looks into rakugo due to interest (and sometimes his work). Tried to become Yakumo 8th's apprentice and failed. Tried to write new rakugo stories and also failed at that due to Yakumo 8th never accepting them.
Amaken
Voiced by: Kappei Yamaguchi

A nosy reporter who pokes into people's lives occasionally for the sake of rakugo coverage.

A Kyoto-style rakugoka who tried to become an apprentice of Yakumo 8th's and failed, leading to him doing TV work alongside his rakugo. Becomes Yotaro's friend prior to season 2.

Konatsu's child, although the identity of his biological father can only be speculated at best. Grows up to love rakugo thanks to his dad Yotaro and his grandfather figure Yakumo.

Real name unknown. A gangster who took care of Yotaro when he was younger.