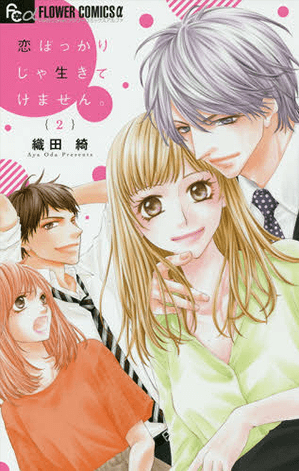 Long work days, life troubles, and (un)lucky lovers — It's a woman's world out there.
Advertisement:

Josei is a demographic category of manga, anime, and other Japanese entertainment aimed at female audiences aged 18 to 40. Like its Spear Counterpart Seinen, Josei is notable for more realistic, less idealized portrayals of romance and life than in works for young girls.

It typically uses a more realistic artistic style than Shoujo manga, though it retains some common traits like sparse use of ink and detailed character designs. While they often still look invariably gorgeous, they're more "hot" than "cute": the men tend to edge more into Biseinen territory while the women look more mature. Stories typically portray everyday life for young Japanese women — usually adults, but occasionally high school age.

Common settings include the workplace (often featuring surly businessmen and confident or put-upon Office Ladies if it's an office), city nightlife, university campuses, and other mundane areas. Like its younger counterpart, historical dramas remain as popular a topic to write about as the modern day: the tales of hardened warriors and the daily struggles of the people both have room to flourish. Horror is also no stranger to this demographic — acclaimed horror writer Junji Ito even wrote some of his stories for women's horror magazines. Romance is more nuanced here than the Shoujo style of "never been kissed", with its heroines often either unlucky in love, working through relationship troubles, or generally experienced. On the flip side, its more blue offerings (known as "Ladies Comics") can get steamier than even the most borderline Teens Love — harems getting sexual, pent-up coworkers, women with "pet"-like subordiates — with a subgenre even dedicated to adapting Harlequin romance. More mature and explicit works in the Yaoi Genre also tend to be published for this demographic.

There is some overlap with Shoujo fans, as there are writers that put out content for both demographics and magazines that cater to both at the same time. While the overlap with Shounen and Seinen isn't as pronounced, works like Michiko & Hatchin or Servamp carry some of the same themes those demographics are familiar with, and some anime can even air alongside them in the West.

Josei manga get adapted into anime far more rarely than other demographics, more often getting live-action TV series if they make it to television at all. However, Fuji Television's noitaminA anime block is notable for focusing on this demographic.