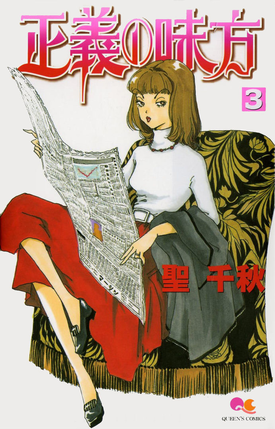 Seigi no Mikata ("Ally of Justice") is a Josei manga by Chiaki Hijiri. It was serialized in Chorus from 2004 to 2008.

Pity poor Youko, who's spent 17 years being tormented by her demonic older sister Makiko. As our story opens, she suffers her latest humiliation when Makiko tells Youko's hot new boyfriend that she suffers diarrhea, causing him to dump her. But this is par for the course for a woman who cheerfully maces the neighbors dogs, and permanently scares off all the patients at the health clinic she's just started working at. Youko can only hope and pray that one day, Laser-Guided Karma will finally hit its biggest target.

But what's this? Youko's new boyfriend was planning to dump her as soon as he got some sex? And the dogs were terrifying the neighborhood? And the clinic was operating without a license? Why does Makiko keep getting civic awards and recognition in the newspapers? Could she actually be an... ally of justice?!

Does not relate to Seigi No Mikata for PlayStation 2.