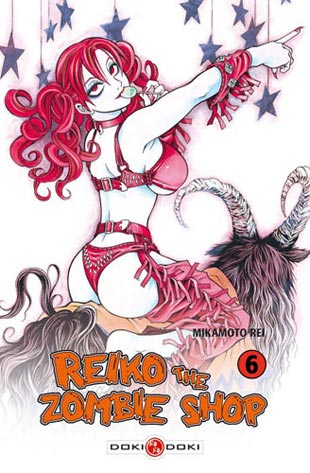 "Oh Satan, Lord of Demons, hear our prayer! Awaken the truths that lie swallowed in this sleeping one! Grant us your majestic power! Breathe life into death, if only for a moment's breath!"
—Reiko Himezono.
Advertisement:

Reiko the Zombie Shop (Zombie-ya Reiko) is a horror manga by Rei Mikamoto, which ran in the josei horror magazine Horror M from 1998 to 2004. It focuses on Reiko Himezono, a Necromancer for hire who will raise the dead for a price.

The first volume of the series contained stories which followed a standard episodic plot formula: Reiko is hired by someone to use her powers to resurrect someone who has just died, and when Reiko does just that she steps back and watches as the personal drama between the living and deceased plays out. Reiko never lets her personal feelings get in the way of her duties as a necromancer, and always charges for her services, even to people she considers friends. She's seen enough to be quite savvy when it comes to dealing with the undead, and always warns her clients that when their loved ones come back they could be unstable. The zombies do indeed turn out to be quite Ax-Crazy, although they retain their intelligence and their memories long enough to hunt down the person responsible for their suffering.

Along the way, Reiko encounters Saki Yurikawa, a teenage serial killer who hunts after little girls to be her new "little sister", and Reiko's long missing twin sister Riruka, who is also a necromancer and plans to use her powers for world domination. Yurikawa, totally deranged and unsymapthetic, debuted in two one-shot stories, Dead Sister, which originally had nothing to do with Reiko until the last chapter of the first volume, where Reiko is called in to help the police.

The second volume marks a shift from zombie horror to an action horror movie feel when Reiko and Riruka are reunited, and Riruka sets out to keep Reiko from interfering with her plans for total world conquest. While the battle between Reiko and Riruka takes up the bulk of the series, some of the stories did revisit to Reiko's career as a necromancer, and also featured numerous one-shot stories that had nothing to do with any of the main characters.