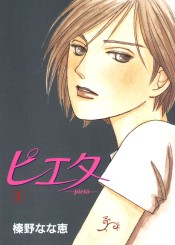 Pieta is a josei Girls' Love manga by Nanae Haruno, which was serialized in Young You from 1998 to 1999.
Advertisement:

It revolves around a student named Rio Sakaki, who is suicidally depressed. Her father is distant, and her stepmother is emotionally abusive. She can't remember her early childhood when her sister and biological mother left. Her therapists, Doctors Shoumitsu and Kyouko Minori do their best to help her situation. Everything changes when Rio meets classmate Sahoko Higa, and they fall in love. With Sahoko's support, it seems like everything in Rio's life is changing for the better...