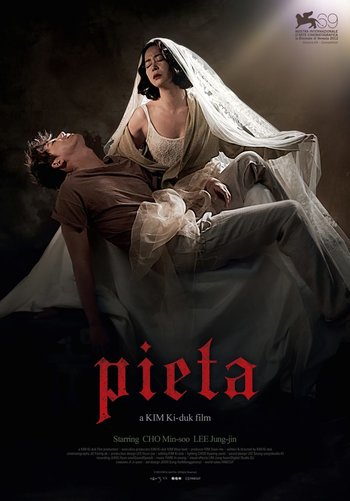 Pietà is a 2012 thriller/drama directed by Ki-duk Kim. It centers around a man named Lee Kang-do, who is a loan shark and known to be brutal and cruel. One day, he is follow by a mysterious woman Jang Mi-sun who claims to be his lost mother. Initially, Kang-do shrugs her off, but later accepts her.

It uses a lot of Christian themes and symbolism, but since it's by Ki-duk Kim, expect a lot of Nightmare Fuel and Tear Jerker scenes.

This movie is notable for being the first Korean-language film to win Golden Lion award at Venice Film Festival, and also the very first Korean film to win the top prize at one of big 3 film festival - Berlin, Cannes, and Venice.