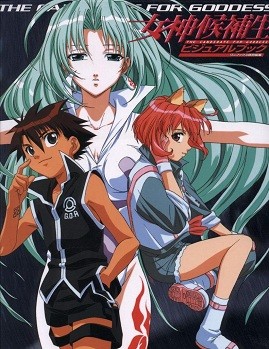 The Candidate for Goddess (女神候補生 Megami Kōhosei — lit. "Goddess Candidate/Cadet") is a manga by Yukiru Sugisaki that ran in the seinen magazine Comic Gum from 1997 until 2001, when it went on hiatus. It was later adapted into a 12-Episode Anime series mostly known in the United States for a very brief, one-time run on Adult Swim during the block's early years (when it aired on the weekends and had animated comedies on Sundays and action cartoons on Saturdays) under the title Pilot Candidate. There was a thirteenth episode OVA that never made it out of Japan until 2016, when Discotek Media rescued the anime's North American license.

The story takes place in the year 4084. It has been over one thousand years since the Crisis of Systems, which resulted in the destruction of four planetary systems, leaving only a single inhabitable planet named Zion. Mankind is forced to live in space colonies, since that one planet is constantly being invaded by alien life forms that have come to be known as the Giseisha ("犠牲者" lit. "Victim"). To stop the aliens and to allow people to land on Zion, mankind has developed the astronomical humanoid weapons, Ingrids, or Goddesses. At the G.O.A. (Goddess Operation Academy), young men are trained to pilot the Ingrids. Each of the pilots has a special power called EX; for example the ability to freeze time or to move at extreme speed.

If you're not aware of Sugisaki's particular claim to infamy, the series has been on hiatus since around the turn of the millennium. But as there are no reports of her passing away, it's not impossible for the series to continue, or even be rebooted.