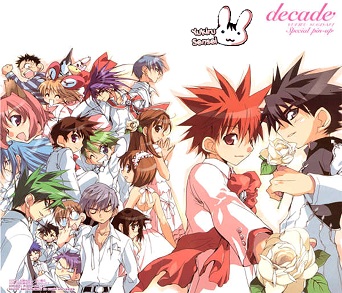 Guess how many of these characters are from completed series? Seven.
Advertisement:

Yukiru Sugisaki is a fairly prolific manga artist with several well-known titles to her name, including Pilot Candidate, Rizelmine and, perhaps most famously, D.N.Angel. However, she also has a slightly different claim to fame, to the frustration of many fans. Laundry list of unfinished series aside, Sugisaki is rarely without a project, which at least gives the fans something to read in the waiting time between updates.

According to Sugisaki her story inspirations are based in shojo, while her art is based in shonen.