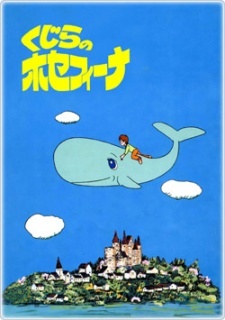 Kujira no Josephina (Josephina the Whale) is a Shōnen anime series from 1979, based on a book by Spanish writer José María Sánchez Silva. It spans through 23 episodes.

Santiago, aka Santi, is a 12-year-old young boy from the Madrid of The '50s. He comes from a more or less well-off family, with a kind mother and a strict doctor dad as well as a sweet grandmother and an Annoying Younger Sibling named Rosa, but he's also incredibly insecure and doesn't know what the future will bring for him. Luckily, Santi also has a great imagination - it leads him to create an Imaginary Friend named Josephina, a blue-green whale who lives in the water glass he keeps on his night table. From then on Santi and Josephina live several adventures in Santi's dreams and mind, helping him to turn his young life for the better...