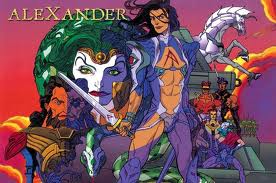 Alexander: Recklessness is speed beyond one's capacity to control. But might increased speed lead to increased capacity?
Aristotle: A horse that eats its rider is neither steed nor speed.
Advertisement:

Reign: The Conqueror is a Japanese anime first released in 1999 under the title Alexander Senki. It was released in English by Tokyopop in 2003, and aired on Adult Swim and Showtime Beyond.

The series was a re-imagination of the life of Alexander the Great, based on the novel of the same name by Hiroshi Aramata. Character and setting design for the show was conceived by Peter Chung, the Korean-American animator who created Æon Flux.